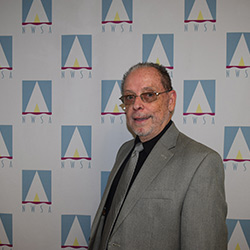 Ron Headrick has directed and/or choreographed more than 250 musicals in stock and regional theaters. He appeared on Broadway in Funny Girl and Wonderful Town and produced major nightclub shows in Las Vegas, Mexico City and Atlantic City as well as all over the Caribbean. For years he produced shows for the Fountainbleau, Eden Roc and other major Miami Beach Hotels. In 1995, he journeyed to Russia, where he taught American Musical Theater and produced a piece of Chekov’s The Three Sisters, covered by both Moscow and Kiev television. His local credits include Hollywood Playhouse, Shores Theater, Royal Palm Dinner Theater and Gablestage (Carbonell Nomination, The Adding Machine). He is honored to be the director of the Golddiggers Show, a local charity that has raised over a million dollars for Leukemia and AIDS research. He has been a master teacher for the National Foundation for the Advancement of the Arts and has been selected to appear in Who’s Who of American Teachers more than a dozen times. He recently received the FILM RECORDING ENTERTAINMENT COUNCIL (FREC) Special Acknowledgement Award for his contribution to the early development of the Miami Beach Tourist and Entertainment Industry. In the summer, he is a Director at the prestigious Frenchwoods Festival of the Performing Arts in New York, training hundreds of serious theater students from all over the world. He has been instrumental in selecting New World School of the Arts students for scholarships to that camp, amounting to more than $250,000. He has been on the faculty at New World since 1990. He holds a BFA in Dance/Theater and an MFA in Directing.