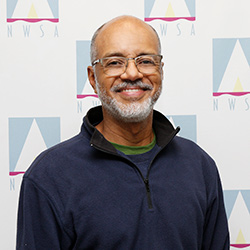 Aramis O’Reilly received his BFA and MFA in Painting from Florida International University and joined Miami Dade College in 1996 as an adjunct professor for the visual arts department at New World School of the Arts. In 2002, Aramis was hired as an assistant professor and has continued his career as an associate professor senior, teaching all levels of painting and drawing. As a practicing artist, his work has been exhibited in various national and international shows and is featured in numerous private and public collections, including collections of The Cintas Foundation in NYC, Ralli Museum in Marbella, Spain, President Jean Bertrand Aristide in, Port-au-Prince, Haiti and the Miami International Airport Art Gallery. Besides his studio work, he has been involved in several large-scale public art projects. In 2012, commissioned by Miami-Dade Art in Public Places, Aramis designed the courtyard floor for the NFL-Youth Education Center and the same year was commissioned by Florida State Art in Public Places to create “Pierina” for Florida International University's School of Nursing and Health Services.