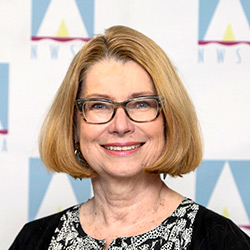 Patrice Bailey has served as the Dean of the Theater Division at New World School of the Arts for 10 years. She holds a MFA in Directing from Florida State University and a M.A. in Oral Interpretation of Literature and Speech Communication from Indiana State University. Prior to becoming Dean, Ms. Bailey served on the faculty at NWSA for eight years teaching Acting, Scene Study, Voice & Diction, Directing. Patrice Bailey has directed over 50 productions including two seasons with City Theater. Some of her directing credits include Sondheim’s A Little Night Music, Company; Rogers and Hammerstein’s Carousel: Ibsen’s Hedda Gabler and Sophie Treadwell’s Machinal with scenic design by Alexander Okun. Her direction of New World Rep’s production of Faith Healer won a Carbonell Award for Best Production of a Play. Bailey has worked as a theater consultant for NETWORK, and for the summer Musical Theater Program at The Music Hall Theater in St. Petersburg, Russia. She has been a speaker for the National Arts Learning Network in London and has conducted acting workshops at the Florida Theater Conference. In 2011, Bailey received the George Abbot Award from the South Florida Carbonell Committee for Outstanding Achievements in the Arts.