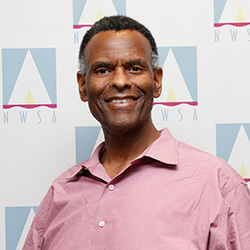 James Samuel Randolph is an Associate Professor in the Theater Division at New World School of The Arts. As an actor he has appeared in over 100 plays, commercials, television shows and feature films. James is a member of Actors Equity Association, Screen Actors Guild - American Federation of Television and Radio Artists. He has performed in many Professional theatres in the region. He won a Carbonell Award in the dual roles of Belize and Mr. Lies in Angels in America at New Theatre. He appeared in a film short entitled Night and Day written by NWSA alum Tarell McCraney which was shown at Cannes's Film Festival’s Short Film Corner showcase in 2010. James played Martin Dysart in EQUUS at New Theatre and was named Best Supporting Actor of the Year by the New Times. He has appeared in various productions of the works of William Shakespeare, including Marcus Brutus in Julius Caesar, Feste in Twelfth Night and the title roles in Othello, King Lear and Macbeth. He was last seen in Tarell McCraney's CHOIR BOY at Gablestage. He has directed over 100 plays and musicals. He appeared in a short film in the title role of Freddie of Wynwood, which premiered at The Miami International Film Festival. Some of his directorial credits include I have before me a Remarkable Document by a Young Lady from Rwanda at New Theatre, Noises Off at French Woods Festival of the Performing Arts and several seasons directing for City Theatre’s Summer Shorts. He has directed a wide variety of plays and musicals at New World, including the musical Into The Woods, Titanic The Musical, The Beaux Stratagem, Macbeth, The Country Wife, Spring Awakening, Jekyll and Hyde The Musical and The Life And Adventures Of Nicholas Nickleby. He has taught at The University of Miami, The University of Florida, and Barry University. James has trained professional actors as a consultant for the Theatre League of South Florida. James has attended seminars and conferences in theatre including the International Conference on Arts and Humanities annually held in Hawaii, and he also attended an intensive on Shakespeare at the London Academy of Music and Dramatic Art.