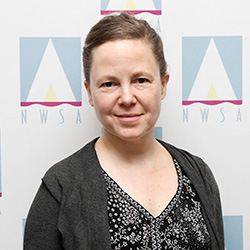 Jennifer Rodriguez-De Castroverde is a professional vocal and acting coach. A Registered Rodenburg Teacher (RRT), Jennifer is the only RRT fluent in both English and Spanish. She currently works out of Michael Howard Studios in NYC, where she taught in the Patsy Rodenburg Master Teacher Certification program. She is also currently certifying with Louis Colaianni in his technique of Phonetic Pillows. Jennifer has trained actors across the United States, Central and South America, the Caribbean, Spain, and Italy. She provides vocal, acting, and speech training, as well as accent reduction. Jennifer’s work has taken her around the country, giving workshops at universities and professional theater companies. A former Assistant Professor of Voice and Acting at Florida International University, Jennifer directed multiple shows and vocal coached all mainstage productions. Additionally, she taught: acting, voice, speech, movement, and modern dramatic literature analysis, as well as presented a workshop at VASTA in New York City. Jennifer is a SAG and Equity actress who has worked in film, television, and theater. On stage, Jennifer has worked at La Jolla Playhouse in San Diego, Actor's Playhouse in Miami, Florida, and with critically acclaimed companies A Noise Within and Circus Theatricals in Los Angeles. She has worked as a Principal in several national commercials for companies such as Target and Home Depot. On film, she can be seen in Warner Bros' Dolphin Tale and Dolphin Tale 2. Jennifer holds an MFA in Acting from the University of California San Diego, where she studied and worked with critically acclaimed directors, including Les Waters, Andrei Belgrader, Brian Kulick, and Mark Wing-Davey.