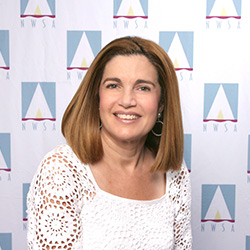 Rosario Martinez-Cañas was born in Havana, Cuba. She graduated from Loyola University with a BA in Communications and received her MFA in Graphic Design from Miami International University of Art and Design. In 1991, she founded The Image Designers Group, an award-winning graphic design studio, featured in several books including Hot Graphics USA and Logo Lounge 3000 Animal & Mythology Logos Master Library. In 1999, Rosario became an adjunct professor at New World School of the Arts where in 2006 she became full-time faculty for Graphic Design. Rosario served on the board of the American Institute of Graphic Arts (AIGA) Miami Chapter. Rosario currently supervises the NWSA AIGA student chapter, and she and her students have raised funds to attend design conferences throughout the world. She has also supervised and curated several NWSA exhibitions and was instrumental in starting Art for New Art, New World School of the Arts’ permanent art collection of established artists to serve as both an inspiration and learning tool for students.