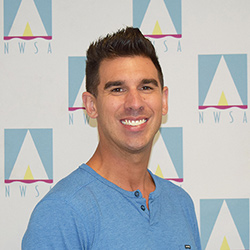 Jeffrey Lloyd Smith is a Miami based choreographer, multimedia artist, and dance educator. He became full time faculty at New World School of the Arts in 2016 teaching Modern Technique, Film Making for Dance, and Projection Design. Smith choreographs works for NWSA as well as for other university programs and professional companies, stages work by Paul Taylor, and serves as rehearsal director for guest choreographers. Originally from Rhode Island, he received his BFA from The Boston Conservatory and later earned his MFA from Florida State University focusing on multimedia technology. After moving to New York, he performed with several dance groups and was a member of The Martha Graham Ensemble and Taylor 2, touring and teaching domestically and in New York City's five boroughs. In 2005 he became a member of The Paul Taylor Dance Company touring across the globe and performing roles in over 40 of Mr. Taylor's masterworks. Creatively, Jeffrey's multimedia pieces, choreographic works, and films have been seen at numerous festivals and events.