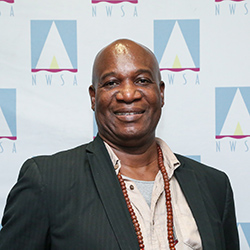 Peter London serves as professor of dance at New World School of the Arts, where he choreographs and teaches Graham technique and Afro-Caribbean dance. A former principal dancer of the Martha Graham Dance Company, Ms. Graham created the role of Shaman in Night Chant for him and recreated other major ballets, which he danced with Mikhail Baryshnikov and others. With the Graham Company, he toured internationally and has subsequently served as Associate Artistic Senior Consultant for the Company and has been the recipient of numerous recognitions including the Legacy Magazine Award, the Southern Districts of the Links Award, ICABA Award, American Jewish Committee Honoree, International Voices of Hope Award, and the Martha Hill Prize for Outstanding Achievement and Leadership in Dance. He is a graduate of The Juilliard School, where he was a William Randolph Scholar, he also holds a BFA degree from New World School of the Arts.