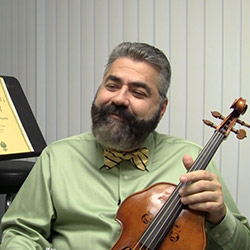 Having performed in twenty countries around the world, Richard Fleischman has received numerous honors, most notably the Windsor Prize, personally awarded to him by Leonard Bernstein; and the Edward Steuermann Memorial Prize, the highest award bestowed by The Juilliard School. A graduate of the Curtis Institute of Music and the Juilliard School, his extensive career over the last thirty years as soloist, chamber musician, orchestral musician and pedagogue has brought him much acclaim. Born in New York City, Mr. Fleischman was awarded a Naumberg Scholarship to the Juilliard School at the age of 16, receiving the Pre-College Diploma, and then the Bachelor of Music and Master of Music degrees in a total of four years. There he studied with William Lincer, eventually becoming his teaching assistant. Further studies were with Joseph De Pasquale and Felix Galimir at the Curtis Institute of Music. He studied conducting with Max Rudolf in Philadelphia and with Sergiu Celibidache in Germany; and composition with Vincent Persichetti in New York. An active performer internationally, nationally and locally, he has performed as viola and viola d'amore soloist with many orchestras and given recitals all over the USA. He is the longtime solo violist of both the Santa Fe Opera Orchestra and the Miami City Ballet Orchestra. He has performed as principal violist for conductors such as Leonard Bernstein, Sir Georg Solti, Sergiu Celibidache, Christoph Eschenbach, Alan Gilbert, Sir Andrew Davis, Edo DeWaart and David Robertson and has recorded for Naxos Records, London/Decca, Sony and Centaur among others. He was a member of the San Francisco Symphony from 1990-1995, performing on several of their Grammy Award-winning recordings. From 2005-2007, he was Guest Principal Violist of the Hong Kong Philharmonic. He has also performed with the Philadelphia Orchestra. From 2006-2017 he was a a member of the Delray String Quartet and was influential in securing commissions for new works from composers celebrated American composers Kenneth Fuchs and Richard Danielpour. His recordings with the Delrays were released on Naxos and Centaur labels. As tenured Professor of viola at Miami's New World School of the Arts since 1996, Mr. Fleischman's viola students have achieved great success world-wide. He has taught and given master classes throughout the USA, South America, Europe and Asia. Professor Fleischman created ViolaFest Miami in 2015.