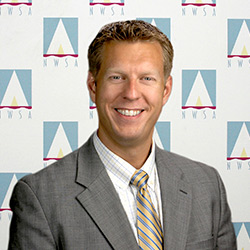 Brent A. Mounger received his Bachelor of Music Education degree from Stetson University. While at Stetson he began an active role in music education. During the Fall of 2004, he took on the assignment of conducting the school’s Brass Ensemble. Later in 2006, he petitioned the faculty, with the help of Dr. Bobby Adams, to create a new ensemble for woodwinds - Chamber Winds. In 2005, Mr. Mounger was President-Elect for the Florida Collegiate Music Educator’s National Conference and served as President in 2006. While President of FCMENC, he restructured the statewide organization and was able to increase the association’s membership. A partnership program was also established where larger universities in Florida were zoned with smaller universities and community colleges to help establish links and communication between future music educators. Mr. Mounger also served on the Florida Music Educators Association State Board from 2005-2007. Currently Brent Mounger is the Wind Ensemble Director at New World School of the Arts, and from 2007 until 2011 he served as Director of Bands at Coral Reef Senior High School. While at Coral Reef the Wind Ensemble received national acclaim and was invited to perform at the 2011 National Concert Band Festival. Under Mr. Mounger’s direction, the Coral Reef Senior High band program received Superior ratings at District and State Jazz and Concert Assessments. Graduates from his programs attend the New England Conservatory, Peabody Conservatory, Stetson University, University of Miami Frost School of Music, The Florida State University College of Music, Berklee College of Music and the University of Florida School of Music. Brent Mounger is the Bass Trombonist with the Miami Wind Symphony, a professional Wind Ensemble in South Florida. His professional memberships include: the College Band Directors National Association, the National Band Association, the Music Educators’ National Conference, the Florida Music Educators’ Association, the Florida Bandmasters Association, and Phi Mu Alpha.